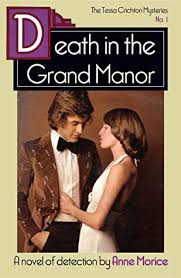 Description: Actress Tessa Crichton, temporarily between engagements, accepts an invitation to spend a few weeks in the country with her cousin, Toby, and his daughter, Ellen, an observant 11-year-old, while Toby’s second wife Matilda, also an actress, is on tour with a new play.  Toby is an eccentric playwright who spends more time talking about his writing than actually getting anything done but recognizes that Ellen is being neglected.  Tessa and Ellen are good friends so Tessa realizes immediately that Ellen is upset.  Ellen blames the Cornfords, affluent neighbors and owners of the local manor, for the recent death of her Pekinese who was fatally caught in barbed wire on the edge of their property (deserving of murder alert!).  Tessa soon learns the couple is universally disliked by the affluent residents of Roakes Common although most hold the wife responsible for activities that have upset the community.  When a dead body turns up, Tessa can’t help getting involved, especially as the handsome man she met at the pub turns out to be the investigating detective.

My Impression: I read Death in the Grand Manor for Lory's Reading the Theatre Month.  This is a lighthearted and amusing series, much of which I read when it was relatively new in the 70s and 80s; I am pleased that the first ten books are back in print and that this one holds up so well.  Tessa is an established actress but not a star, and her down times between gigs allow her to sleuth, sometimes imprudently.  In this book, the murder investigation does not really intersect with Tessa’s acting career but that is not true in later books, as I recall.  Tessa handles most situations with aplomb and ignores anyone who tells her to stay out of trouble, as indeed one should:

He stopped at the gate, then turned to me and said, ‘My instinct is to suggest you pack your bags and get as far away from here as you can.  Unfortunately, it might be just about the worst advice I could give you.’

‘Why? You surely don’t imagine that Toby or I would be suspected of having any part in it?’

“No, of course not, nothing like that.  Luckily, you were both miles away when it happened.  But you might be called as a witness, which would be no fun at all, I can assure you.’

‘Oh dear me, yes, I am sure I should hate that,’ I said, and fell to wondering what I should wear in the witness box should the disagreeable necessity arise.

This is also my fourth book in the Cloak and Dagger Reading Challenge. 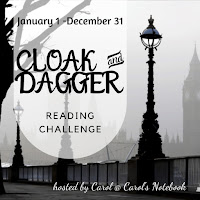 Source: Thank you to Dean Street Press for providing me with a copy of this ebook in return for an honest review. The books are also available in paperback.  I am not totally sold on the covers but I admire the publisher for trying something different.
Posted by CLM

I belatedly thought of Ann Morice as a possibility for the theatre theme. I read a lot of her books in the 70s and 80s also.

Of course, I thought I did not have any of her books anyway so did not matter. Now I find I have one of her books, Scared to Death, in a Detective Club Edition with two other books (one by Hugh Pentecost and one by Janwillem van de Wetering). Anyway I am glad this has reminded to look for some of her books.

I love that excerpt, it sounds like fun. I'm not keen on that cover, it reminds me of some of those awful 1970s D.E. Stevenson or Helen MacInnes covers.

I'm not keen on that cover either but the plot sounds like fun. A series I'd heard of before I must admit.

I'd not heard of the Tessa Crichton series. It sounds fun. I've read a few of the Furrowed Middlebrow books from Dean Street Press in the last couple of years and its is fantastic that bringing good stuff back in to print like this. :D

I am glad to know about this series, especially theatre connection.

Dean Street Press sent me the first two books in this series (just because they love me - HA)! Unfortunately, my reading list is FULL for April so I don't know if I'll be able to get to them, but I'll try!

I just finished this as well and I enjoyed Tessa's breezy voice. You capture a good example with your quote. Thanks for joining in Reading the Theatre, again!

Dean Street Press has released a lot of interesting vintage novels recently, I hope I'll get to read them next year (fingers crossed) :)

".. wondering what I should wear in the witness box should the disagreeable necessity arise." That really made me cheer up, haha. And of course, the handsome man turns out to be the detective, or is it vice versa? 😂 ~ Lex