On Thursday, we began with a short walking tour of Tournon-sur-Rhône, a town on the right bank of the river. You ask which is right and which is wrong – it is based on the direction the river is flowing, but having spent 17 years living in New York I know that the Hudson flows in two directions, so one can only hope that the Rhône is less contrary. It seemed like a pretty town with a castle that had been turned into a museum, an annual onion festival, and one of the oldest lycées in the country. Our guide Solène told a story about Francis I’s grandson being mysteriously poisoned while staying at the castle in Tournon. 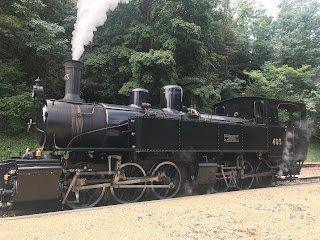 The main event of the morning, however, was our excursion to the Tournon Steam Train, a historic train that dates back to 1891 and looked a lot like the Little Engine That Could. It follows a tributary of the Rhône and provides amazing views of the gorge below – if you are sitting on the right side of the train! We were sitting with Dan from Nashville, who we liked, and were glad when the people in the good seats traded with us.Raquel had urged us to wear black as riding this train attracts soot. I had to resort to the crumpled dark pants I’d worn on the plane and on Wednesday, and was delighted to find my missing watch in the pocket! I had taken it off when we were caught in the rain. We got back to the ship in time for lunch which was potato leek soup, pasta, and Opera cake, which looked good but had a strong coffee flavor I did not care for.  However, I boldly asked the waiter to bring me chocolate mousse instead! It's easy to get carried away by having a chef at one's beck and call . . .In the afternoon, as the ship headed to Vienne, there was a nautical talk (which was more about the ship’s stats than locks or the Rhone) and a tea party – life on board already seemed like Downton Abbey, particularly the way the staff hug the wall and incline their heads silently if they encounter you in the corridors! We took tea with Dan and his wife Drew Ann and chatted about Nashville - she had nonspeaking appearances on several episodes, which was fun to hear about.Finally, before dinner, there was a fabulous walking tour of Vienne, a stunning town about 20 miles south of Lyon, our ultimate destination. Our guide was Stephanie who got a kick out of the fact that my mother was another Stephanie. She explained that the Romans conquered the original settlers (Celts) and it was one of the most important Roman towns with significant Roman and medieval buildings still visible today.We liked the St. Maurice Cathedral, which had scaffolding outside but was very attractive within. Stephanie-the-guide kept the town’s 1st-century Roman temple until the end. She was interested to hear we had been to Nimes and said the Maison Carrée and this Temple of Augustus and Livia were the only two intact Roman temples in France. She asked how we thought it had survived and my clever mother guessed that it had been used as a church. Once the Christians took over, the temple became the parish church until the French Revolutionaries took it over in the 18th century; then it was “restored” in the 19th century.
This was one of the best excursions we did, partly because of the enthusiasm of the guide and partly because of the richness of Vienne, which we had not heard of previously but highly recommend.
Apologies to my nephew Nicholas - I have not come across his patron saint anywhere but today I saw my godfather's (Maurice), my brother's, and my youngest nephew's, all in the same church.   And yet, St. Nicolas is the patron saint of Rhône river bargemen so maybe Viking should have named a ship after him instead of someone created by a cow!
Posted by CLM

I love the train and the view from the train. I am very envious of that.

Also the photo of the interior of St. Maurice Cathedral is lovely.

Nothing is ever as good as the real thing but one never stops trying to capture the moment!

The train trip was especially fun because I had no expectations (I even wondered why we had signed up but it was fun).