The afternoon’s trip to Pont du Gard ended well but was nearly a disaster. We found the bus stop described by the tourism official quite easily and bought our train tickets to Avignon for the following day while we were waiting. The bus itself was very hot and full of noisy children but it was only half an hour’s ride. However, when the bus driver said, “Pont du Gard!” and dropped us off, we found ourselves in a town called Remoulins and a trickle of a river that wouldn’t have impressed many Romans (ancient or modern), although there were some families picnicking and wading on this hot Saturday.
We climbed down crumbling stairs (I knew my brother would be upset to see my mother on these stairs so didn’t let her follow me all the way down to the water) and I asked a guy fishing where the Pont du Gard was. He asked in French if I had a car and I shook my head. He said in a car it would be five minutes but when I asked if it was possible to walk, he said reluctantly that it was possible, and pointed the way to the opposite river bank. I thanked him and reported back. It was really hot but I remembered the tee shirt I had seen in Paris that said something like, “There are no bad decisions, only great adventures!” so we climbed back up to street level, crossed to the other side of the body of water and started down a dusty road.I do not advise starting a walk on a dusty road in 90+-degree weather without water and not knowing how far off your destination is. We walked and walked and walked. There was a moment when we should have turned around in order to catch the 4 pm bus but decided to trudge on. After we’d been walking about 45 miserable minutes we ran into a man going the other direction and asked him where the aqueduct was. He looked at us blankly and we were terrified for a second we’d walked in the wrong direction. “Le Pont du Gard?!” I said quickly and he said it was another kilometer but in a way that made us think it was even more. We staggered on and finally saw first a sign for “Pont du Gard camping” and then two signs, one for bicyclists and one for parking. Clearly, no one ever goes here on foot. I consulted a young man who sent us to the bicycle path. This was circuitous and ended up in a miserably hot field with an uphill path. We nearly burst into tears. My mother said she didn’t think she could go much further and I felt the same but we couldn’t pass out in an empty field either! I pointed to a tree with shade and said we had to get there. Then we rested a few minutes before assaying the last hundred yards. When we finally saw a glimpse of the Pont du Gard in the distance, I wanted to cheer. Plus, there were places to sit down and vendors. I went to the first one and croaked out a plea for water. She said she did not sell water because plastic was bad for the environment. Well, very true, but I probably would have gulped some of the Rhone at that point. I settled for apple juice which we drank gratefully until we had recovered enough to walk closer to the Pont du Gard and then on it. We should have walked to the opposite side of the bridge but we didn’t realize there was anything significant on the other side. In fact, there was a visitor center over there but we didn’t learn about that until later. 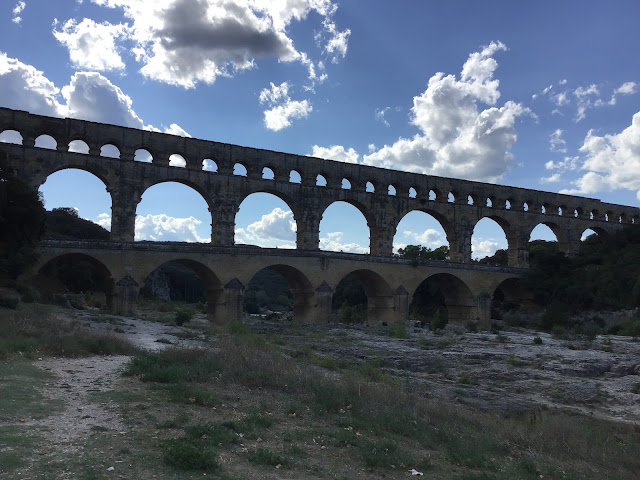 Happily, although we practically passed out getting there, the Pont du Gard was/is stupendous and was worth the trip, although I would have liked it better without any tourists but us. On the other hand, it was nice to see dozens of families frolicking in the shallow bits of the river below.
What did Charity think?

Whenever I look back now on the strange and terrifying events of that holiday in Southern France, I am conscious of two things which seem to dominate the picture. One is the continuous dry and nerve-rasping noise of the cicadas, invisible in the parched trees, the other is the Roman aqueduct over the Gardon as I first saw it that brilliant day. I suppose the ten or twelve minutes that David and Rommel and I spent gazing at those golden arches spanning the deep green Gardon were like the last lull before the thunder.

My mother and I had ice cream at the most poorly organized café I have ever patronized. We stood in one line to get to the front, then had to wait for a family of six to order, then had to wait to order in another place, then had to move back to the first location to place or order, then push past all the people waiting in line to get outside – most of whom were not wearing masks. But the ice cream was good so we were in a better frame of mind for the long walk back to the bus stop. We walked out through the parking lot and came to a locked gate before we reached the road, which we sort of had to climb over. Puzzled, we looked back at it and realized it was an entrance gate and our circuitous route meant we hadn’t paid an admission fee. We felt no guilt after our travails! However, the walk back wasn’t as bad. This time we had water, knew that we were going the right direction and there was an end in sight. It wasn’t quite as hot, either. We reached the bus stop in plenty of time and heaved a sigh of relief when it appeared at the right time. The air conditioning was in much better shape on this bus but after our unexpected 6-kilometer walk we were not in shape to complain. We don’t know if the tourism office sent us the wrong way or if they simply should have advised us it was not an excursion for pedestrians. Don’t worry; we will write to complain. 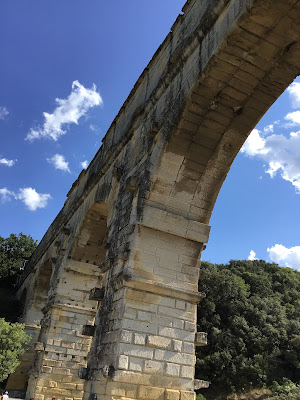 We still had to walk from the Nimes train station to our hotel but it is a quick and pleasant walk when one doesn’t have luggage. My mother expressed regret that we had missed Mass but said reluctantly we could use the travel exemption as our excuse. I said it was a pity as I had worn a skirt instead of shorts so as to be dressed appropriately for St. Baudile but my mother sniffed and said my mini skirt was not what she considered suitable for church. It is a very nice Ann Taylor skirt that my sister Clare gave me and not a mini, just above the knee!
Posted by CLM

Sounds like a ghastly walk but I am getting such a kick out of your travelogue!

Wow, I cannot believe you or your mother made that walk. Sounds like you are both in great shape. And I am glad it was worth it. It made a great story.

We thought we were in better shape than we were! But after our ordeal, we managed to laugh. Annoyingly, however, it turned out there was a museum that we never saw because we were on the wrong side of the river. Oh well.

That sounds so frustrating! But it makes for a great story, whenever something like that happens to me I just remember that someday it will be an entertaining anecdote. But not so funny when it's happening!

I never made it Nimes but I did visit Segovia on a side trip to Madrid and the aqueducts were amazing, they remind me very much of the Pont du Gard. Much easier to get to though, I just took a bus to Segovia and they were right there!