France has mandated a Pass Sanitaire (a health pass) to enable access to cultural venues, such as museums, as well as all restaurants and bars, for employees as well as customers (it was smart - now 77% of those eligible are vaccinated). I tried very hard to get these in time for our trip, uploading our documents several times. The requirements kept changing and there were no explanations, only an automatic receipt. Last week I read the government was weeks behind in processing applications and tourists might have to take a Covid test every 72 hours. As there were several cultural destinations planned for our three days in Paris, I decided to test our luck at the Musée D’Orsay, a day in advance of our ticketed visit. The first guard consulted said we could not get in without the Pass but his nicer colleague, when I crept back a few minutes later and waved my vaccine card, said we could just show our documentation. This tracked to online advice I had seen to be polite but persistent, asking for a manager if necessary, and it has worked for us since.  It is startling to be asked by our waiters for our Pass, however, especially when eating outside. but we are glad everyone is taking precautions. 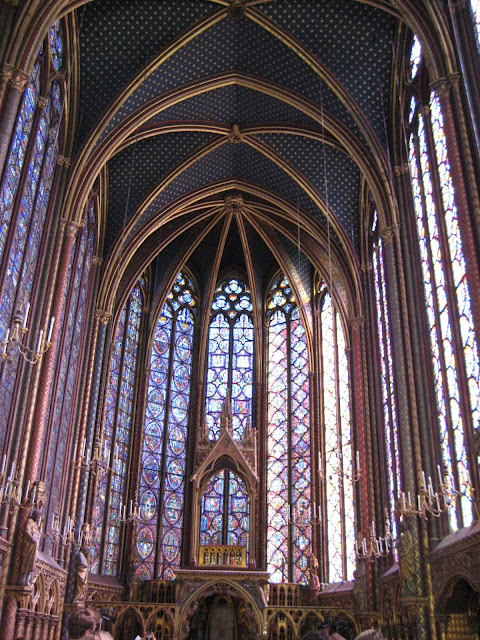 We strolled and it was fun to be in front of us the buildings we had seen from the boat trip the previous day, although because it had turned around and because we kept going back and forth across the bridges on the Seine, I somewhat lost my sense of direction and had to Google our directions occasionally. We walked through the Tuileries, a public garden near the Louvre that was by Catherine de' Medici in 1564. It turned out to be my least favorite of the gardens I visited while in Paris, primarily because there were no flowers. There was a merry-go-round that I considered but did not ride. However, of course, I did not resist the English Bookstore near the Pont Neuf bridge – at least, we went in and looked admiringly at many books but purchased none. My luggage is too heavy because I brought a few of my unfinished 20 Books of Summer, which was foolish.
Our plan was to do a walking tour of the Île de la Cité but we had not been paying attention to the time. Suddenly, my mother said we would be late for our ticketed visit to Sainte-Chappelle, so we dashed across the closest bridge to the other side of the Seine. King Louis IX built this two-level gothic chapel to house his artifacts, including items purported to be Christ’s Crown of Thorns and a fragment of the True Cross, and it was painstakingly restored from 2008-14. However, no modern Catholics believe those items survived so poor Louis would have benefited from the “Don’t Get Scammed” workshop I sometimes teach to Boston teens. These days people come to gaze in awe at the 15 stained glass windows, each 16 yards high, depicting 1,113 scenes from the Old and New Testaments. Pictures are inadequate but that didn’t stop anyone from taking them!After lunch at an outdoor table at the nearby Brasserie Les Deux Palais, we checked the Conciergerie, separated from Sainte-Chapelle by the Palais de Justice (formerly the Palais de la Cité), now a courthouse. The Conciergie was once a revolutionary tribunal and prison where Marie-Antoinette was held but we found it a little disappointing, although there was interesting installation art replicating the Seine.In the evening we went to visit our friend Mark, a family friend, who recently moved to Paris and had invited us over for drinks. He met us at the Villiers Metro stop and gave us a tour of his new neighborhood, near Parc Monceau, which was bursting with families enjoying the sunny evening. We loved this area, very vibrant and full of interesting-looking shops and restaurants. Mark and Jean-Yves live in a nice apartment, with high ceiling and this gorgeous courtyard: 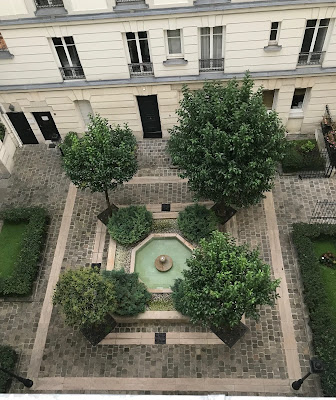 Jean-Yves made us gallettes for dinner, which were much like crepes, with ham, onions, and I think one other ingredient. They were very tasty and it was especially impressive because he had done a round trip to Normandy for work that day (that sounded even more exotic to me than living in Paris, although he said it was usually only about 90 minutes).

I'm glad you made it into the Musee D'Orsay! And Sainte-Chappelle is so beautiful. Your pictures brought back many happy memories for me. :D

I am glad that you have been able to see the cultural spots that you had planned to visit. It all sounds wonderful and like you are having a good visit.

So glad you got into Musee D'Orsay, one of my absoutely favorite places in Paris.