The whole affair began so very quietly.  When I wrote, that summer, and asked my friend Louise if she would come with me on a car trip to Provence, I had no idea that I might be issuing an invitation to danger.  And when we arrived one afternoon, after a hot but leisurely journey, at the enchanting little walled city of Avignon, we felt in that mood of pleasant weariness mingled with anticipation which marks, I believe, the beginning of every normal holiday. . . .

How was I to know, that lovely quiet afternoon, that most of the actors in the tragedy were at that moment assembled in this neat, unpretentious little Provencal hotel? All but one, that is, and he, with murder in his mind, was not so very far away, moving, under that blazing southern sun, in the dark circle of his own personal hell. A circle that narrowed, gradually, upon the Hotel Tistet-Vedene, Avignon.All right, that is my last quotation from Madam, Will You Talk? but, really, you should check to see if your library has it.  There are also scenes that take place in Marseilles but we did not have time to go to a place we had both visited before.  I gave my copy to Raquel, the amazing Activities Director of our cruise (don’t worry, I have another at home). Anyway, like heroine Charity Selbourne, my mother and I had wanted to see Avignon for a long time.  With or without a compelling murderer.   Although I don't want to scare you by our geekiness, I think both of us had written papers on the Avignon papacy so we were eager to see the Palace of the Popes.For those who don’t know, the Pope has not always been based in Rome. In the 14th century, Pope Clement V, who was French, moved himself and his entourage to Avignon where the papacy stayed for the next 68 years, under seven different popes. The Palace of the Popes was built under several of these popes, and it served not only as a palace and lovely example of gothic architecture but also as a fortress because it was dangerous to be a Pope - the Swiss Guards didn’t start their protection gig until 1506.
We were extremely sad that it was raining (although we looked quite dashing in our new Viking windbreakers) but our guide, Marc, was very good. First, he took us to the famous Pont d’Avignon, the famous medieval bridge made famous by the song, built in the 12th century connecting the two banks of the Rhône. He even sang for us! He dealt well with some of the less mobile members of the group who were having issues with the wet cobblestones. One woman named Judy refused to walk any farther and he patiently settled her on a chair in a café where she would be fairly dry and said we’d come back for her after our tour. She got tired of waiting and went to the Avignon tourism office to complain he had abandoned her! I think some of the passengers on our ship possess the desire to travel but have physical limitations they aren’t willing to acknowledge. We had breakfast with Judy later in the week and she turned out to be pleasantly curmudgeonly and her friend Chris had gone to Wellesley with one of my father’s girlfriends before my mother. You never know what you’ll find out over chocolate croissants!The walking tour of Avignon ended at Les Halles, a visually appealing and pricey food market. I took a five-minute look around and while I was gone, some young man barreled into my mother. Thankfully, she was not hurt but was quite annoyed that he damaged her new umbrella. We walked back to the attractive square outside the Papal Place (full of cafes and people, even in the rain), then up a long flight of steps to the 12th century Avignon Cathedral. In the picture above, you can just see the gilded statue of the Virgin Mary atop the bell tower of the Cathedral.  Unfortunately, just as I pulled open the front door, a dour verger-type said he was shutting from 12-2 and removed my hand from the door.  I tried the "But my mother has come from thousands of miles - can she just have five minutes?" but he was extremely unmoved.  We were very miffed and probably should have gone back in the late afternoon when it stopped raining. We spent quite a while in a gorgeous shop full of linens and pottery but I couldn’t settle on a tablecloth so left empty-handed. I regret that now! 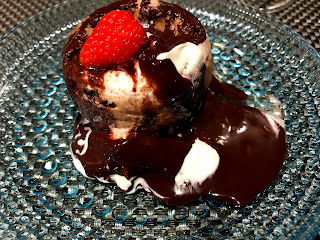 The ship had an elaborate Taste of Provence dinner for us Tuesday night and the highlight was the dessert table! I was captivated by a Baba au Rhum which consisted of a small sponge cake, saturated in syrup, then topped with whipped cream, covered in chocolate sauce, with a raspberry on top. I also tried the apricot tart, an éclair, chocolate-covered strawberries, and went back for a second Baba au Rhum. Even the chef was a bit stunned by my enthusiasm.  Maybe he was afraid he'd have to roll me back to my stateroom!
Posted by CLM

Next time, please put me in your suitcase! I like Mary Stewart and dessert!

I will be looking for Madame, Will You Talk? for sure.

Interesting about the Pope not always being based in Rome. So much history I don't know. One of my best friends in high school and college was history buff but I was not interested. And one of our librarian friends in Stockton has a masters in History. We always go to him for history questions, and also religion questions, because we know little in that area.

What an interesting story about Judy the pleasant curmudgeon.

So good you could actually visit the places in the book. Pity about the rain and the grumpy people :)