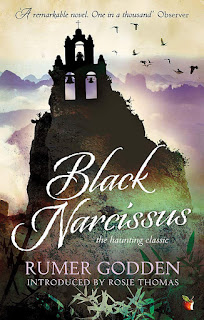 Description: A small group of Anglican nuns sets off to open a school in the Palace of Mopu in the Himalayan mountains, near Darjeeling, India.  Sister Clodagh is appointed the leader of the group, although her superior has doubts and advises Sister Clodagh to remember she “is the servant of all” if she wants to be a successful manager.   Sister Clodagh is more worried about the suitability of the property donated by an Indian General but refuses to admit her misgivings, especially when her authority is challenged by the youngest nun, Sister Ruth.

If the sisters thought they would be welcomed by the locals, they are doomed to disappointment.   The General tries to drum up customers by paying the children to attend school and the mothers to visit the clinic but the old Ayah who manages the Palace tells them they are unwelcome and warns that the spirits of the palace will not submit to the sisters’ will.  Of course, the nuns pay no attention to her; they genuinely want to serve the local people, even if they do not understand them and at times are condescending to them.   They are shocked by the toddler who comes to school in clothing that leaves his bottom bare, although they understand he is not toilet-trained and reluctantly recognize the practicality; however, they love the child anyway, which is more important. 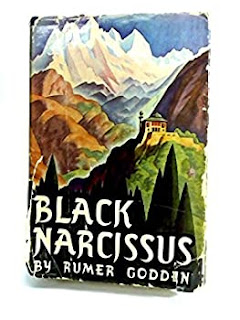 Both difficulty and assistance emanate from the General’s agent, a somewhat slovenly Englishman, Mr. Dean, who has a bad reputation with native women.  Sister Clodagh is reluctant to rely on him, especially when he tells her the sisters won’t last a year, but they need him to organize the maintenance of the Palace.  Slowly, a form of respect and friendliness develops between them, but at the same time Sister Ruth becomes unhealthily obsessed with him, leading irrevocably to disaster.  The atmosphere of the Palace is not conducive to rational thought and each of the sisters becomes distracted (partly the elevation?  partly the weather/setting? Is it just haunted by long-ago tragedy?) and the arrival of two new visitors to the Palace sends everything out of control.  One is a nubile young woman Mr. Dean asks the sisters to take in to train and the other is the General’s handsome nephew, who desperately wants to be educated for Cambridge.  He is nicknamed the Black Narcissus and reminds Sister Clodagh of the young man she loved in Ireland, whose rejection sent her to the convent.

My Impression: I had read there was a new mini-series (filmed in Nepal) coming in November but it wasn’t until Matthew Gilbert, the Boston Globe’s television critic had seen and recommended it that I decided to select it for my Radcliffe Reading Group this month.  I was surprised none of them remembered Rumer Godden from their childhood – I certainly remember The Doll’s House, which we owned, and Miss Happiness and Miss Flower which I read from my grade school library.  I recall that even in her children’s books Godden has dissenting characters who rebel against the protagonist and make snide comments like Sister Ruth.  I figured that if anyone didn’t like the book, she could watch the miniseries instead!  It is a remake of a movie starring Deborah Kerr, which was not filmed on location but seems to have made a strong impression on anyone who saw it.  Much later, Godden wrote another book about nuns that is somewhat better known, In this House of Brede (1969), about a professional woman who gives up everything to join a Benedictine order. 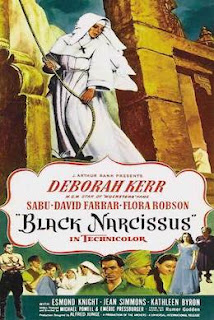 I got a little nervous after I announced it, partly because of the wary silence on the Zoom call and partly because Hamnet would have been a safer choice.  On the other hand, Rumer Godden is a gifted writer who deserves to be known in this century!  I hope most of my friends persevered long enough to be as captivated by the story as I was, feeling the sense of impending doom, and almost be able to see the snow-covered Himalayan mountains in the distance.  I suspect I am the only person in my book group who had nuns in her family: my grandmother’s sister on one side and my grandmother’s first cousin on the other.  They were busy well-educated teachers, and one was actually a Milton scholar.

Here are links to the gorgeous new Virago edition (shown below) and the original New York Times review from 1939:

One would never anticipate – certainly I did not – that a tale along these lines could prove so irresistible.  For Black Narcissus is a real discovery.  Not only has it charm, humor, subtlety, and a shining kind of freshness, but it is actually almost without flaw.  It would be hard to say how Miss Godden could have improved on this bizarre and exquisite little novel. If I seem effusive, I am so deliberately.   This is not a book to miss.

By the way, it was interesting to see the NYT Bestseller list for July 9, 1939.   Most of the books I’ve never heard of, let alone read, but it does include Overture to Death by Ngaio Marsh for $2, which I have read, and Mein Kampf by Hitler for $3, which I have not! 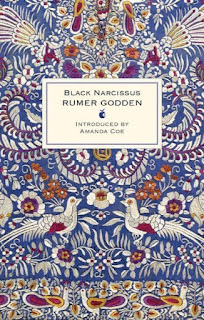 Source: Newton Free Library.  Funny to think the very copy I read, a rebound first edition, was waiting for me at my childhood library all these years. The Newton Library is actually open for browsing.  I zipped over at lunch today and as I departed I said in a friendly way to the staff at the Plexi-glassed Circulation Desk, “It means a lot to your patrons that you are open.  Thank you.”  The response was a slow, not very gracious, “No problem,” and you know what I think about that.

I read most of Godden's books in the 1970s and did enjoy them although I am not drawn to books featuring nuns, or anything religious really. I might re-read it before the series begins, as I recall the Deborah Kerr film is worth watching too.
We can't browse in the library but can order books and pick them up from the library. I think Margo is so glad to see a human being, it's quite a nice experience and feels safe.

Although I have no religious affiliation, I have read several mysteries featuring nuns and enjoyed them. I don't know why I never thought of reading Black Narcissus. My husband is a big fan of the 1947 movie by Michael Powell and Emeric Pressburger.

Apparently, I just missed seeing the 1947 movie on TV. I have the new series DVRd but wanted to wait until I finished reading the book to watch it. I appreciated the link I found on Tracy's website about Clergy Detectives. Because I had nuns in my family I am wary of books where the nuns are portrayed in a negative way but I have read a number that are positive, and some books involving minister/sleuths are very good. I used to really like the Kate Charles books too; I think she is still writing but perhaps no longer published in the US.