Time for another round of Bookshelf Traveling in Insane Times which was created by Judith at Reader in the Wilderness and is currently hosted by Katrina at Pining for the West. This may be the last one – I haven’t run out of bookcases but I think Katrina and I may have run out of steam. Today I am looking at a bookcase in my home office which includes some old and new titles. During the pandemic, however, I have mostly worked in the dining room where the Christmas tree is. 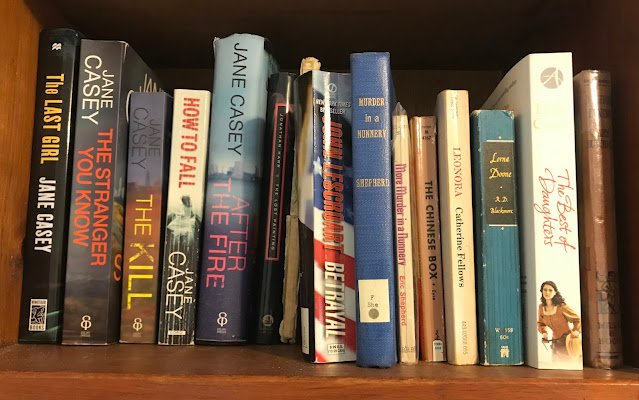 On the left are crime novels by Jane Casey, whose detective Maeve Kerrigan is a big favorite with my sisters and me. I think we own all her books except the first two and a standalone but they travel between households, especially in the months before publication in the US. Many months ago, the Boston Globe asked for pandemic reading suggestions and I wrote in to suggest Jane Casey’s books. I was amazed to hear back five months later on a day when I hadn’t had time to unfold my newspaper that my letter had finally been published:The Lost Painting by Jonathan Harr (2005) is a historical mystery about Caravaggio, probably given to me by my parents; I haven’t read it but enjoyed A Civil Action (1995) by this author, which was a nonfiction legal thriller, eventually made into a movie starring John Travolta. I always enjoy John Lescroart’s books which are legal thrillers or police procedurals, depending on which character’s point of view he chooses. Unfortunately, his titles are so generic I can never remember which ones I have read until I am several chapters in. 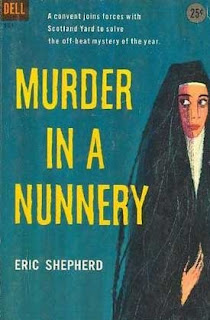 Murder in a Nunnery (1940) and More Murder in a Nunnery (1954) by Eric Shepherd are two old favorites I was introduced to by Sister Sessions, the shrewd librarian at my secondary school. I remember her telling me that the author’s sister was a prominent RSCJ nun (her own order) and that was how he got the convent setting right (and without mocking the nuns and their vocation). I have been meaning to reread these. If Sister is looking down from the great Afterlibrary in the sky, I know she is unhappy I failed to return that shabby hardcover! The other books are a bit random: The Chinese Box by Katherine Wigmore Eyre (1959) is a gothic but it turns out none of her adult books are as good as a YA historical, Another Spring (1949), about Lady Jane Gray, which is upstairs somewhere. Leonora by Catherine Fellows (1972) is an above-average regency that I read in junior high and have held onto all these years. 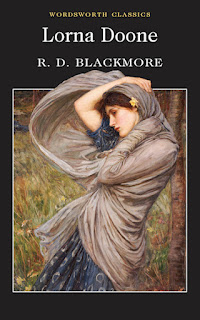 I have always meant to read Lorna Doone (1869) so when I came across a copy at a library book sale I snapped it up. Don't you want to know more about 17th century Devon? Okay, maybe it's not at the top of my list . . .  The Best of Daughters by Dilly Court (2012) is a historical about a suffragette during WWI (kind of Catherine Cookson-esque) and if this shelf were easier to reach I probably would have read it by now! Dangerous Loving (1963) is a rare hardcover by my favorite romance author, Mary Burchell (1904-86). She is one of the talented writers who put Mills & Boon and Harlequin on the map. Some might call her a guilty pleasure – but I say, why feel guilty about reading?

Do you have an author you consider a guilty pleasure?  Does he or she get prime shelf space?

I may try Jane Casey again since you recommend her so highly, but I hate to add a new writer to my list. I have a TBR pile (physical, not Kindles) of at least 1000 books and should not buy more books.

I have a copy of Murder in a Nunnery, which I think I bought on your recommendation. I had read about it earlier, but you gave the final push.

First I must say that TracyK's at least 1,000 TBR pile has really cheered me up - she's so much worse than me. I feel like curtsying to her - is there such an emoji? there should be! The only book from your shelf that I have read Constance is Lorna Doone which I read as a youngster, it might have been abridged. As ever I'm adding these authors to my ever growing list. I'll do my travelling tomorrow and link. My children's books are sort of guilty pleasures. I'm sure people think I shouldn't be reading them at my age but I don't agree.

I probably have several hundred books on the floor trying to get into a TBR! That doesn't stop me from putting dozens more on hold at the library and getting intrigued when one of you recommends something intriguing. I was planning to use this three-day weekend to do some tidying up of the piles but that didn't happen and I have to go back to work tomorrow (although I don't have to physically go anywhere, just focus on the things I was too busy to get to last week).

Tracy, wait until you are in the mood for a feisty heroine and then Jane Casey will be waiting for you. I am hoping we will all be vaccinated and frolicking about in libraries and bookstores by summer. I am less optimistic about my trip to London and Edinburgh scheduled for June. I got accepted to the study abroad program I'd been looking forward to for 18 months but they warned me it may get canceled.

Katrina, now that you have a grandchild you can justify all your children's books reading as curating a library for her. In fact, I once hosted a baby shower for someone and told all the guests to bring their favorite children's books. Was the baby named Skye because your son and daughter-in-law like the Isle of Skye or is it a coincidence? You probably never read Lorna Hill but her books set in Skye which I read for the first time during the pandemic made me long to visit. However, I am not the hiking type so perhaps I would be disappointed.

I may have told you both that my last year living in New York, when I knew I would be moving back to Boston in August, I was very disciplined and only read books I already owned (so I could weed and not pay to move quite so many). I donated hundreds before I left and even so, the movers said they had never seen so many books. My sister posited that if I really wanted to read them I would have done so already, but sometimes one is just waiting for the right moment! The postal service is so messed up that my sister and her family still haven't received the books I sent for Christmas! I hope the box arrives before her children have to go back to school but I especially wanted her to have something good to read on Christmas because I don't think it wouldn't occur to anyone else to get her a book.

I am glad that my 1000 book (estimated) TBR backlog cheered Katrina up. Fortunately my husband does not mind. He does not even mind if I buy more books.

I agree, some of the books that have been on my shelves for years are just the perfect book for the time when I get around to them.

I hope your sister's box arrives soon for her, I have heard many horror stories about packages and important documents being delayed. We have been very lucky.

I still have most of the books that I bought for my own children as well as the many children's books that I've bought for myself over the years. So far I've only bought one board book for Isobel Skye (who is being called Izzy already by her parents) They named her Skye because they love the Isle of Skye and went there for their mini honeymoon in February 2019. It's a good time to go there as there aren't so many tourists around - or midges! It's not my favourite place though. The name Skye has become very popular for girls now so I'm happier with Isobel as a first name. Let me know if you do get to Edinburgh sometime.