Millions of readers read about the Killilea family of Westchester, New York, a loving Catholic family inspired by their daughter Karen who was born with cerebral palsy.   Karen was several months premature and weighed under two pounds, so no one thought she would survive but her parents were determined to get their child the medical care she needed.  They fought ferociously for medical care and to have her lead a normal life despite her disability. 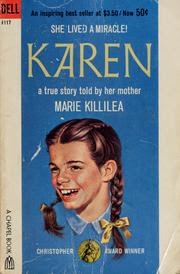 One of my Betsy-Tacy friends just forwarded me the news that Karen died on October 30, 2020 at 80 years old.  I remember reading Karen (1952), written by her mother Marie, and being chilled by Marie’s description of one doctor who told her in China they would leave a child like this on a mountain top to die.   Marie and James Killilea refused to listen.  They felt their child had an indomitable will to live that kept her alive and thriving as an infant, as they took her from doctor to doctor until they found someone who believed in their daughter. 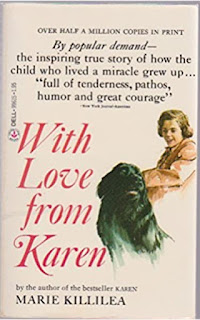 Karen, a very moving book that became a best seller in 1952, detailed Karen’s struggle to overcome the limitations of her cerebral palsy and her family's fight to help her lead a satisfying life.  Karen’s family spent two hours per day for more than 10 years doing physical therapy with her, and Karen learned how to walk with crutches, write, swim and move her legs and arms. The book won a Christopher Award, which goes to media that “affirm the highest values of the human spirit.”

With the proceeds, the family was able to purchase a larger home in Larchmont, New York, where they lived next door to another prominent Catholic couple, Jean (Please Don’t Eat the Daisies) and theater critic Walter Kerr.   Marie later wrote With Love from Karen (1963) and a children’s version of Karen that was called Wren (1954), which my middle sister got for Christmas that year. 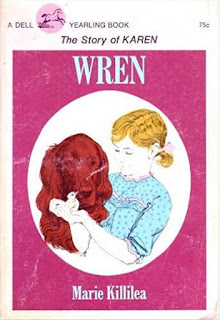 Does anyone remember these books?   Maybe you only read them if you went to Catholic school like me but I am told there is a Facebook group of fans.
Happy to report that as a result of my inquiry the New York Times finally wrote an obituary about Karen on December 12, 2020.
Posted by CLM

I have not heard of these books but they sound wonderful. I did enjoy Jean Kerr's books growing up so that little connection is intriguing.

Oh, I remember and have a worn paperback copy somewhere. Of course, my name is Karen. I remember reading Wren as well. I don't know why I loved this so much. For middle schoolers today, it would be super dense.

I had wondered if she were still alive, and how the rest of the family's lives continued past the end of the second book (which is my favorite). I remember reading that she worked for one of the Catholic dioceses, in the Chancery offices.

There were a lot of wholesome faith-based books in the library of the Catholic school I went to, including these, but it was also full of Anya Seton, Norah Lofts, and Frances Parkinson Keyes, so I read everything. Marie Killilea was really an extraordinary woman in an era and she would have been so proud and happy that her daughter lived to be 80. I am surprised not to have found any major obituaries. I did come across one fundraiser appeal. I suppose the royalties from the book were split evenly among the children and even a reprint in 2018 doesn't sell very many copies any more.

Not Catholic, but I owned (and probably still do in my parents' attic) a used copy of Karen. I don't know that I read the sequel, although it definitely would have fallen into the type of books I was reading in middle school.

The New York Times (with encouragement) finally wrote an obituary:

Like many other girls who grew up in the 60s I bought a Scholastic copy of Karen and then found With Love From Karen (the sequel). I still own copies of both books (I'm now 68) and have shared them with able-bodied and disabled friends who all report how inspiring Karen and her family were. These two books are well worth reading, even now. Knowledge and awareness and tolerance of differences have all increased but still need to be taught and maintained.

I have read and much enjoyed both KAREN and WITH LOVE FROM KAREN. (I have not read WREN, as I was already a teen when I read KAREN.) I do not share the family's religious heritage, but anyone of any faith (or none at all) can enjoy (and be moved by) reading about a loving and devoted family starring a child with amazing determination. Not everyone has CP, but most of us are faced with various challenges in life; it only we all had such determination to deal with them! So sorry to hear of her passing, but she lived a long, full and happy life; what more could anyone ask for?