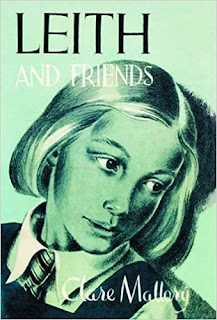 Description: When the Leith family moves to Woodbury (somewhere in England’s Home Counties, according to the GGB edition) for her father’s new job, 14-year-old Leith Rossiter joins the Lower Fifth at a large girls’ high school.  Knowing how shy she is, Dr. Rossiter tells her to “swim with the tide” until she knows her new classmates, and “make the effort to be friendly and to join in their activities.” While this willingness to participate in their pranks makes Leith popular with the rowdy girls in her form, she is embarrassed when she realizes Persis, a prefect she admires, and others find the Lower Fifth tiresome and she tries to steer her form into steadier behavior.  She yearns to be friends with the older and accomplished Persis but, once that is achieved, her possessiveness nearly spoils their friendship.  Persis has to speak some painful truths in order to set Leith on a more balanced approach to developing and maintaining a group of friends.

My Impression: It seems appropriate to end the year with one of my favorite reads of 2020, a hideous year that provided quite a bit of uninterrupted time for reading, particularly of books one owned but had not had time to read.  Although I have been a fan of school stories since I picked up my first St. Clare’s or The Secret Language, I did not come across Clare Mallory until I joined a GirlsOwn listserv as an adult.  She quickly became one of my favorites in the genre, although, initially, the books were very hard (and expensive) to find.  Mallory (whose name was Winifred McQuilkan) was a New Zealand educator who began writing stories to entertain the students at her school in Dunedin.  Leith & Friends and Juliet Overseas are set in England but all her other books take place in New Zealand.  They are all delightful stories and deserve more recognition.   Leith & Friends is a standalone title set at a day school and, while full of familiar themes, brings its own charm to the new girl/new school trope.  Leith is determined to make good at her new school so her parents won’t be disappointed and because she wants to fit in.

Her hero-worship of Persis is way over the top but it is understandable that a shy girl in a form where academics are shunned would admire someone attractive, intelligent, accomplished and congenial, and want to revel in that friendship once secured.  It is unusual in this genre for friendship to exist between girls of different ages/forms, where often a strict hierarchy exists.  Mallory makes this plausible in two ways: one is that individuals of different ages on the same team develop camaraderie organically and the other is that Leith’s parents welcome Persis’ widower father into their home and include her in the invitation.  That helps Leith and Persis develop their friendship out of school, and it is the most satisfying relationship imaginable until Leith becomes jealous of Persis’ other friends and activities. Fortunately, although Leith is initially hurt and devastated by Persis’ plain speaking about her possessiveness, she takes steps to build other friendships and eventually recognizes that while Persis may be her favorite, her other friends are congenial too and that expanding one’s circle is valuable.

Leith’s parents are very hospitable and I enjoyed how Leith’s friends feel welcomed into her home, whether they are with the parents or talking casually in Leith’s room (I am reminded of one of my favorite books, Pauline by Margaret Storey, where the opposite is true - visitors are expected to play board games with the entire family). I like how Dr. Rossiter takes an interest in Leith’s classmate Trina who is interested in medicine and Mrs. Rossiter is helpful to another girl knowledgeable about art.  However, of course, the best part is that shy Leith gains confidence: she becomes a talented goalkeeper for the field hockey Second Eleven, she helps the Lower Fifth pull itself together and stop playing the fool, she succeeds academically and moves up to a more serious form but manages to stay friendly with the old group, she comes up with a clever plan for a fundraiser that also boosts the morale of a classmate down on her luck, and she makes wonderful friends: mutual friendships where both sides benefit.
Of course, Mallory is right about the dangers of obsessive friendship and the rewards of having a varied circle of friends but it is an interesting contrast to the world of Enid Blyton (and others) where heroines long for one true friendship and that is considered normal and desirable.  Maybe this is the difference between writing from the perspective of being a headmistress vs. authors who idealize the day or boarding school experience or want us to?  The unmentioned issue is that these passions substitute for crushes on the opposite sex or could lead to romantic same-sex relationships.  As Sue Sims observes in The Encyclopedia of Girls' School Stories, a crush "may inspire a girl to unusual heights or make her sink to baseness" (vol.1, p. 82).  Fortunately, Leith pulls herself together, after initial feelings of jealousy and despair.

Source: Personal copy.  Thank you to Bettina Vine for introducing me to this author, the former headmistress at her school in New Zealand, and to Girls Gone By for the new edition!  I am glad I didn't pay $392 for my copy!  I remember such a delightful afternoon visiting Ann and Clarissa near Bath many years ago, before they started the publishing company, eating scones and talking books for hours.

Christmas Present to Self, aka My Brass Bowl:  As I was typing this, the mailman delivered a package from Girls Gone By!  It must be a sign (of what, you ask? why, to buy more books).   Can you believe that a package Ann mailed on December 4th in Somerset reached me before the box I sent my sister earlier this month got to New York?  Not to mention the box of books I sent her in May that never arrived at all. 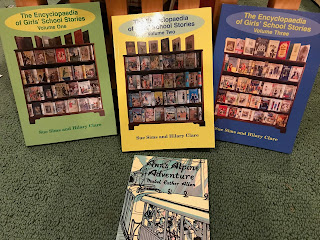 Thank you, I found that very interesting and have signed up for their newsletter.

The women who run Girls Gone By are delightful. I spent a wonderful afternoon with them a number of years ago when I was visiting Bath, nearly missing the last train back to London as there were so many topics of mutual interest. I was laden with books and WI jam when I finally departed. Clarissa has since become a minister which she juxtaposes with her publishing.

Very glad to have been of service!

This reminded me so much of Enid Blyton's Naughtiest Girl in School and Darrell Rivers series! Those were such reliable old favorites, though I think they never had crushes (or weren't ever old enough to have crushes?). Wonderful to remember those old favorites from a new one. :-)