It's Wednesday so it’s time to take a look at what I’ve read, what I’m reading, and what I’m planning on reading.  This was inspired by Taking on a World of Words. 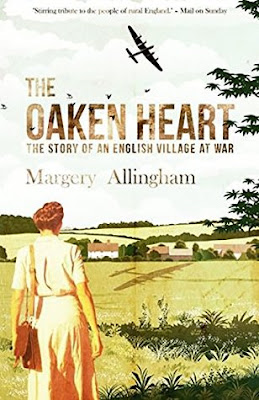 I am currently reading The Oaken Heart by Margery Allingham (1904-66), better known for her classic Golden Age mysteries featuring detective Albert Campion.  This is a slow-paced but enjoyable memoir about life during the early part of WWII in her small Essex village.  It was written about 1938 at the suggestion of her American publishers, and her goal was clearly to create support there as America would not enter the war until the attack on Pearl Harbor in 1941.  Thank you to Katrina for the recommendation - her review is more eloquent than mine!
I just finished Spoiler Alert by Olivia Dade, which just came out and got a lot pre-pub buzz.   It’s a contemporary romance about Marcus, who stars as Aeneas in a Game of Thrones-like mega-hit on television, and April, an avid writer of fan-fiction about the show.  When she posts a picture of herself in costume as Aeneas’ love interest, she is attacked online for her plus-size figure.  Marcus sees the spiteful comments and asks her on a date to show support, and their IRL connection is immediate and intense.  I was bored by the fanfic excerpts which interrupted the narrative and for me were unintelligible but which really obsessive TV fans might enjoy. 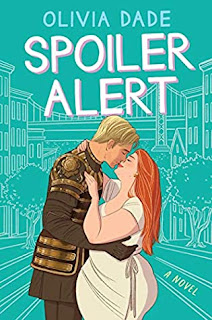 The message of the story is acceptance as Marcus and April cope with the complications of their suddenly sizzling romance and the emotional baggage each brings to the relationship.  I did find April somewhat unreasonable in her expectations that Marcus understand what she needs without explanation when he comes across as practically perfect but, overall, it was an enjoyable read without quite living up to the hype. 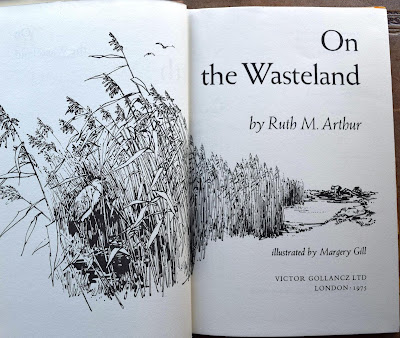 Next up is On the Wasteland by Ruth M. Arthur (1975), illustrated by Margery Gill.  I was looking at my RMA titles yesterday for Bookshelf Traveling and noticed this beautiful hardcover with dust jacket that I think my sister received for Christmas in the mid-70s.   It is about an orphan named Betony whose early years were spent in Scotland, living a Romany life until her mother dies.  Now her only home is an orphanage on a salt marsh in Suffolk, where she escapes from reality with vivid dreams of the Norsemen who lived there hundreds of years before.  At 13, Betony is expected to start planning for her future but that may require giving up the dreams of the past that make her life bearable.  This is slighter than her better-known books but has the same evocative description of the countryside, a sense of melancholy, and a heroine who feels deeply but cannot always express her feelings.  Another gem of a book by Arthur. 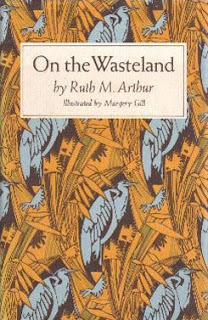 Happy Birthday to my sister Andrea!
On the Wasteland images copyright to Atheneum
Posted by CLM

I had no idea Margery Allingham had written a book like Oakenheart. That I must look into.

Spoiler Alert is reminding me slightly of Fangirl by Rainbow Rowell which I enjoyed (although it's about twin 'fans' going off to uni in Nevada, so not quite the same) but didn't find the fanfiction bits included at all enjoyable. Not a bad book though.

I bought a copy of The Oaken Heart when I read about it at Katrina's blog. I had heard of it before but it fell through the cracks so I went ahead and got it. Now I just have to figure out where to fit it in (my reading).

On the Wasteland looks very good (the cover, the illustrations). And very expensive, so you are lucky to have that nice edition.

Tracy, The Oaken Heart is pleasant but written in a way that you can't read more than a few pages at a time. Luckily, I always have an armful of books going at once.

Cath, I liked Fangirl but, now that you mention it, had that same issue of not being enough of a fanfic groupie to appreciate some of the aspects of it. I really loved her book Eleanor and Park, which I listened to while driving. However, the ending was so abrupt I thought that the CD was damaged and had to go get a physical copy out of the library. It was exactly as read but I still don't get it. Spoiler Alert was a little over the top but still entertaining. The librarians who voted it one of their top picks of November were very enthusiastic, which is how I happened to hear about it.

I'm glad that you're enjoying The Oaken Heart - albeit slowly! I think I raced through it so could probably be doing with giving it a reread in the future. Thanks for linking to me. The Ruth M Arthur book sounds so interesting.