Time for another round of Bookshelf Traveling in Insane Times which was created by Judith at Reader in the Wilderness and is currently hosted by Katrina at Pining for the West.  Last time I displayed a shelf that holds my juvenile hardcover Joan Aikens, so today we are going downstairs to a shelf that is shared by Joan and her sister Jane Aiken Hodge, another favorite.

Their father, Conrad Aiken (1889-1973), was a Pulitzer Prize-winning poet, short-story writer, novelist, and critic who was born and died in Savannah, Georgia.  This makes it sound like he never left the state but, in fact, he spent much of his adult life in Massachusetts, New York, and England. His daughter Joan was born at Jeake's House on Mermaid Street in Sussex, near the famous smugglers' inn which I visited not long ago. 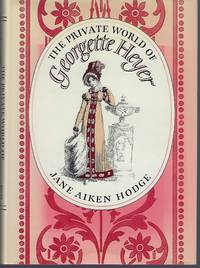 Joan Aiken’s children’s books may be my favorites but I also enjoy her adult historical fiction/historical romances (several written in homage to Jane Austen) and own at least three.  The first time I heard of her sister Jane was when my mother bought a copy of Savannah Purchase in paperback and accidentally left it at my grandmother’s house unread!  It is a classic impersonation story and remains one of my favorites: Josephine and Juliet are French-born cousins who look like twins.   Josephine is unhappily married and living in Savannah when Juliet, penniless, reaches America and seeks help.  Josephine persuades Juliet to impersonate her while she tries to free Napoleon from Elba. Juliet then falls in love with Josephine’s husband, which she knows can only lead to tragedy . . .  When I visited Savannah for the first time, I brought a paperback with me (I own three copies) and tried to identify all the locations in it.  When I mentioned a book, all the locals assumed I was carrying around Midnight in the Garden of Good and Evil, which I didn’t even like.

Jane Aiken Hodge’s books include historical romances, some contemporary gothic mysteris, and several books of nonfiction.  These latter include Only a Novel: The Double Life of Jane Austen, The Private Life of Georgette Heyer, and Passion & Principle: Loves and Lives Of Regency Women (they are on different shelves from the fiction). Like her sister Joan, she enjoyed Austen and Heyer, and her own historicals were mostly set in the Regency era. 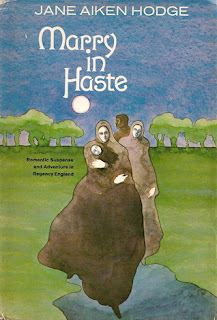 Another of my favorites is Marry in Haste and, felicitously, the copy I bought online came autographed. The heroine has been importuned by the son of the house and dismissed in disgrace when she is rescued by Lord Leominster:

“I have yet to learn that it is impossible to be a governess and a young lady at the same time.”

This came near the bone, and she found it, for a moment, impossible to reply. He was looking at her thoughtfully, and she was grateful for the near darkness of the carriage that hid her blush.  At last he seemed to come to a conclusion.

“I have no possible right, of course,” he said, “to question you about the predicament in which you find yourself, but surely there must be somewhere more suitable than the village inn for you to spend the night.  It is not at all, I feel sure, what you are used to .  And besides – forgive me – even a governess has a reputation to consider.”

Marry in Haste, like several of Hodge’s books is set in Portugal.  About 1998, I was working at Abbeville where we published a beautiful book called Portuguese Decorative Tiles that made me think of her.  Somehow I found her address in Sussex and sent it off with a copy of an article I had written for RT Magazine about my favorite books (which included Savannah Purchase) and an admiring note.  I knew she had earned a master's degree at Radcliffe so probably mentioned I was also an alumna as well as a fan.  I was thrilled to receive a response on an old-fashioned typewriter and she enclosed an autographed paperback copy of her book about Georgette Heyer, which was very kind.

These talented sisters had many interests in common and I am guessing they were close because Joan also maintained a home in Sussex, although did not reside there year-round (there was also a brother who wrote).  While Jane did not achieve the same renown as Joan, she also had thousands of devoted readers.  I am still collecting some of her more obscure titles but own the ones I like best.  In addition to the books already mentioned, I recommend Greek Wedding, Runaway Bride (the first JAH I bought for myself), Judas Flowering, and One Way to Venice.  Many of her books seem to be available on Kindle now.

The nonfiction books by Jane Aiken Hodge sound very interesting and I will look into them more. Also her fiction.

You have lots of great books! I'm shocked to see that it was 2016 when I read her book on Georgette Heyer. I read both sisters as a youngster but not nearly as many of them as you have. I buy their books whenever I see them in secondhand bookshops but of course it's a long time since I've been able to do that. I should resort to the internet. How lovely that you were actually in touch with one of them.

Now I know I've read books by these sisters but what they were I'm not sure. I have Regency romances in my head, so probably Jane Aiken Hodge? I seem to recall they were very good but it's many years ago now. Her book on Georgette Heyer would probably be my kind of thing. And what a lovely story of how you wrote to her and recieved an autographed book in reply. You have so many fascinating stories to tell.

I hadn't realised they were sisters so thank you for clearing that up. I've read the Jane Austen book but nothing else! Off to find your Joan Aiken post now.

Jane Aiken Hodge's historicals probably have too much romance for you, Tracy, but I find them great comfort reads. Both sisters wrote books that were influenced both by Austen and Heyer, set in the early 19th century, but also wrote books with modern settings. And JAH's book about Heyer is a must for Heyer fans.

I actually met Joan at a book signing and I think it was after that I wrote to Jane and mentioned it. I didn't want to seem like a stalker but I thought she would be interested to know I had met her sister.

It is a problem when you have multiple copies of a particular book. The best thing is to keep the one in the best condition and give the other(s) to a deserving friend. I am trying to do more of that.