Time for another round of Bookshelf Traveling in Insane Times which was created by Judith at Reader in the Wilderness and is currently hosted by Katrina at Pining for the West. Today I am looking at a bookcase in my bedroom which includes some really random titles along with some mystery authors I like. 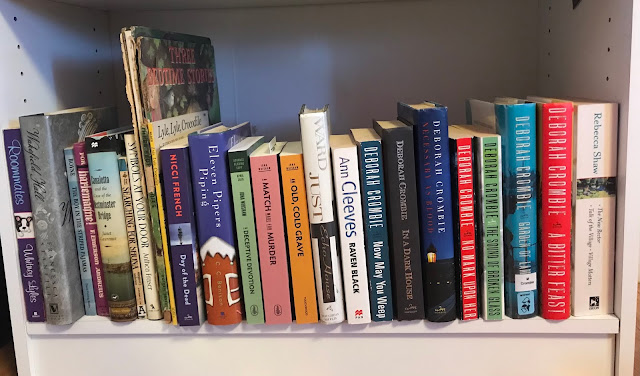 Roommates, Wakefield Hall, Echo House, Symbols at Your Door, and Eleven Pipers Piping are all books I think I could donate to More than Words, a social justice used bookstore half an hour away, once I have read them. I read the precursor to Eleven Pipers and enjoyed it but I guess not enough to rush into the next book, although I could use a seasonal read! The Boy in the Striped Pajamas was a gift from my friend Emily which I read when she first sent it but don’t remember it well. For Charlemagne! (1949) must have belonged to my mother or possibly uncles. I am afraid the youngest nephew is practically 14 so too old for it now. 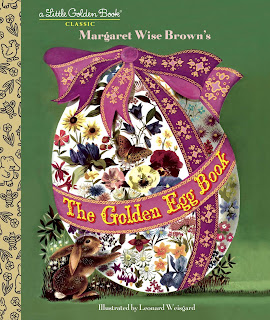 Somehow some of my very first picture books made it to this shelf, two oversized Golden Books, although with a few exceptions we were not a Golden Book family: Three Bedtime Stories, illustrated by Garth Williams (falling apart but once contained Three Little Pigs, The Three Bears, and The Three Little Kittens), and The Golden Egg Book by Margaret Wise Brown, a classic still in print today. Lyle, Lyle Crocodile is there too but I think that belonged to one of my younger siblings. I am pleased to see a tattered copy of Searching for Shona, an evacuation AND impersonation story (two themes you know I like) because I thought I must have given away my copy. 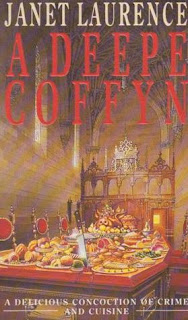 Janet Laurence is a skilled mystery writer, best known for a ten-book series about Darina Lisle, a cookbook writer, that I really enjoyed (although it looks like I never found copies of the last two). Canaletto and the Mystery of Westminster Bridge is the first of another series, set in 18th century England. Maybe I will read it next month for the Historical Fiction Reading Contest! 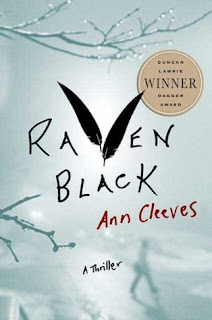 Over the summer I finished Nicci French’s eight-book series about Frieda Klein (my review of Day of the Dead), which I really liked, and read two of her other books in November that weren’t as good. I’ve become a big fan of Iona Whishaw, whose books are a little like Maisie Dobbs but with a Canadian setting (my review of book 1 is here). I bought the first Ann Cleeves book, Raven Black, at the charming Sevenoaks Bookshop in Kent. We were on our way to Scotney Castle to see a priest hole (because we are that sort of family) but the group wanted a snack despite a late breakfast (because we are also that sort of family) and I saw a bookstore while enjoying a croissant from across the street (no surprise to anyone). I have continued to read and enjoy Ann Cleeves and now would like to visit the Shetland Islands where this series is set (and here is my review of the first book in her new series, The Long Call). 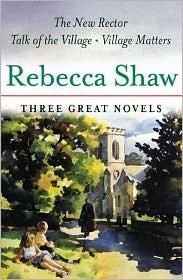 I think Deborah Crombie is one of my favorite mystery writers currently writing. She points out that her books are nearly twice as long now as when she launched the series but she is still trying to produce them in the same amount of time, so I won’t complain about waiting for a new one. I love her detectives, Gemma James and Duncan Kincaid, and nearly every book has made my year-end Best lists. Here are links to some of my reviews.   And I almost forgot, in the corner is a Rebecca Shaw omnibus set in a small village, starting with The New Rector.

Have you read any of these?
Posted by CLM

No I haven't read any of those books so I feel that I'm really missing out on some great reads. We were planning to go to Shetland via Orkney this year but of course Covid stopped that plan. I really should read some Anne Cleeves books before we go - whenever that might be.

I haven't read any of these, but Ann Cleeves has often been recommended to me. Enjoy!

I have read Deborah Crombie's series through Where Memories Lie, and I read the first four books in the Shetland series. Also the first three books in Ann Cleeves Vera Stanhope series.

I bought a copy of A Killer in King's Cove by Iona Whishaw on your recommendation, and will read it in 2021. It looks like there are some other mysteries on this shelf I should try.

I love the cover of The Golden Egg Book by Margaret Wise Brown, although I don't know if I have ever read it. Probably, but don't know for sure.