Tied Up in Tinsel by Ngaio Marsh 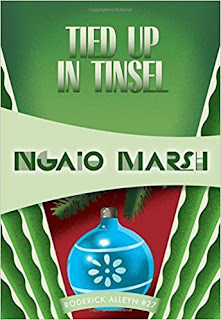 Description: Noted artist Agatha Troy (known to all simply as Troy) has come to Hilary Bill-Tasman’s remote country estate just before Christmas to paint his portrait. Hilary chatters as she paints him about his unconventional upbringing by his maternal relatives, Colonel and Mrs. Forrester. He also reveals his humble origins, describing how his father and courtesy-uncle Bert Smith began with a mere cart in London and grew their business to become a vast antiques enterprise. Hilary has become wealthy and bought back the family’s Tudor estate on the moors which had fallen into disrepair. Hilary reveals to Troy that in order to staff Halberds, which he is expensively restoring, he has hired five former inmates of the nearby prison, who served their time for murder and now need gainful employment.
Troy accepts his invitation to stay on for Christmas as the portrait is not done and her husband, Detective Chief-Superintendent Roderick Alleyn, is in Australia on business. Colonel and Mrs. Forrester, along with their manservant, Moult; Uncle Bert; and Hilary’s fiancée, Cressida Tottenham, arrive for Christmas. Disrupting the festivities, there are a lot of unfunny practical jokes, each reminiscent of the method in which the individual members of Hilary’s staff committed a murder. During an elaborate medieval performance, someone disappears and is eventually found dead, whereupon all the ex-murderers are terrified of being suspected. Fortunately, Alleyn returns from Australia in time to join the macabre Christmas celebration and find the killer. 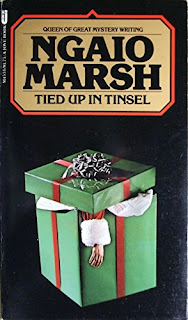 My Impression: I am a longtime fan of Ngaio Marsh, one of the Queens of the Golden Age of Detection Fiction, but some of her books are better than others and this is not one of my favorites. On the other hand, I like the variation on the house party theme: at first, Troy is the only guest and she tries to focus on her art and not worry about whether the ex-murderer staff (all of whom are exaggeratedly peculiar) are still homicidal.  When Hilary's actual Christmas guests arrive, it is more like a traditional house party as each personality is revealed and they interact awkwardly. The plot depends on or at least includes an odd characteristic of Hilary’s admittedly odd uncle and aunt: they bring all their valuable papers with them in a locked chest when they travel. It helps to travel only by car with a driver.


It is interesting to observe Troy on her own, absorbed in her work, which is how the book begins. She finds Hilary eccentric but (a) she didn’t realize the strange setup before she arrived and (b) she is intrigued by her subject whose face reminds her of a camel. When she finally admits to herself that Halberds is not just weird but dangerous it is too late to leave. I like that the book has a cast of characters – I had to go check the eight Marsh books I own to see if that is true of all her books, which it is, likely a vestige of Marsh’s acting days. During my brief stint as an editor, I remember asking one of my Regency authors to include such a list in her book, which featured a house party and a new, unexpected guest arriving each day. She was afraid it would spoil the element of surprise but with a relatively short book, it was hard to keep track of everyone.
In this very interesting article, Ngaio Marsh, A Crime Readers Guide to the Classics, I read that Marsh disapproved of the death penalty which makes her using these ex-murderers as a sort of punch line in her mystery somewhat unfeeling. Perhaps when one gets to book 27 in a series and becomes attached to a plot, one simply has to go for it! My last attempt at a Christmas mystery was a miss, so I tried again with Tied Up in Tinsel because I barely remember reading as a teen, although I did recall enough mid-book to guess the murderer and motive.  And did I mention there is not enough Roderick Alleyn in this book? 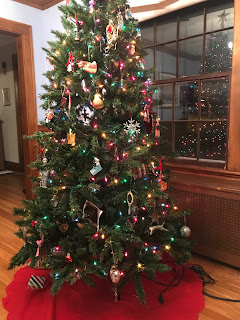 Why I have never read any Ngaio Marsh I can't say. Having read about some of these female Golden Age writers in Martin Edwards' book I'm trying to put that right. I read my first Marjorie Allingham this year for instance. I will get there as it sounds like I ought to at least try Marsh's books.

I think I read this years and years ago but certainly not in the last twenty years. I reread a good number of them around 2003. Anyway, I will have to unearth my copy and read it for Christmas next year. I like the country house setting.

Yes, I do like that vintage paperback edition of Death in Ecstasy (which I cannot spell). That is one I read back in 2003.

I read this a while ago and don't actually remember it very well. Ngaio Marsh is one of my favorites though.

I just recently read my first Ngaio Marsh, Died in the Wool. Now I want to read more!